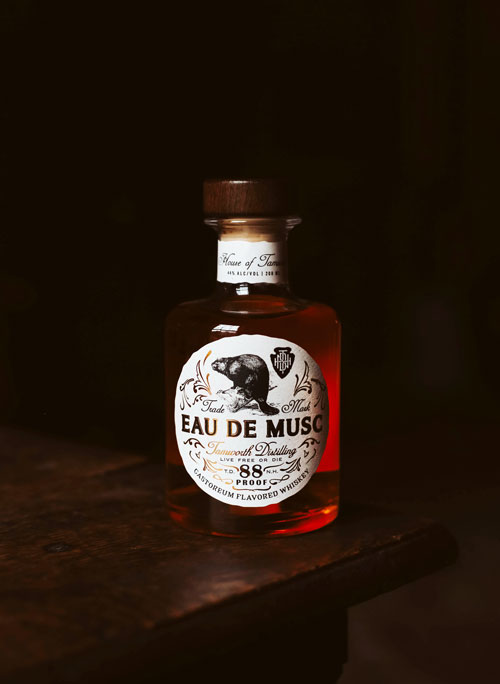 Eau de Musc proudly features an old-world flavoring technique that uses the oil extract from the castor gland of the North American beaver, which exudes a leathery, raspberry taste, and acts to fortify the whiskey flavors. The full-bodied, two-year aged bourbon whiskey has a bolstered mouthfeel with a vanillin nose and notes of spice. The addition of birch oil, raspberry and Canadian snakeroot, a woody spice akin to ginger, comingle with the natural fruitiness of the castorerum, making the finish warm, crisp, and incredibly palatable. New Hampshire life is ruled by the wilderness, and beavers are widely prevalent, extremely territorial, and prone to overpopulation. Therefore, rural communities like Tamworth work with licensed and responsible trappers to manage the population in order to sustain the local ecosystem. To source the castoreum for the limited-edition release, the Tamworth Distilling team works with Anton Kaska, a professional trapper and outdoor skill instructor who is known for his commitment to sustainable practices. Anton provides the distillery with the castoreum sacs, which would otherwise be discarded, to produce the infused bourbon whiskey.